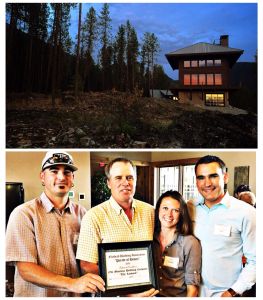 You would think because the Lookout is mine that I am the only person to write the story of the Lookout…but that isn’t true. This project became the special, unique and memorable project for every single person who worked on it, and because of that I feel like I am the luckiest girl in the world.

The Lookout is not a normal project, and not a normal house. It wasn’t meant to be normal. It was meant to be different. It was meant to be exceptional, and one of a kind and something that didn’t fit into a traditional category. It was being built on family property, it was being built as a forever home, a structure that would be passed down to my nieces and nephews, and someday to their kids, and not something built with the parameters of being practical or needing to fit into some resale box. I wanted a visitor center where people wanted to come and hang out, drink coffee and play games, I wanted an apartment so nice it was booked and used every week of the year, and I wanted a little compound to make people feel like they were living a little piece of Glacier Park. I wanted a shed designed after a little vacation getaway in Jackson Hole and a wall tent fit for glamping. I wasn’t asking for much.

The Lookout came to be because MY builder of the year, Jon Krack, pushed me to think beyond what I could imagine. He took my great ideas and made them even better…which is all you can ask for from your partner and your best friend. And we had FUN. We challenged each other and we tried new things and we asked a lot of the people working with us…and because of it we created something fantastic.

Jon and I walked through the house about 5 AM on the morning we finished, just in time for the parade, and I could hardly believe it was actually MY house. What a funny feeling…after a couple years of planning and building and looking around and having the feeling “this is really too good to be true”. I feel like it belongs to everyone who worked so hard on it, poured their hearts into it for me, who gave it their best, who made me happy, who gave me far more than I could have ever asked for or imagined.

I wanted something different, something unique, and something special…and without a doubt I got it (and so much more). Luckiest girl in the world. Home run.