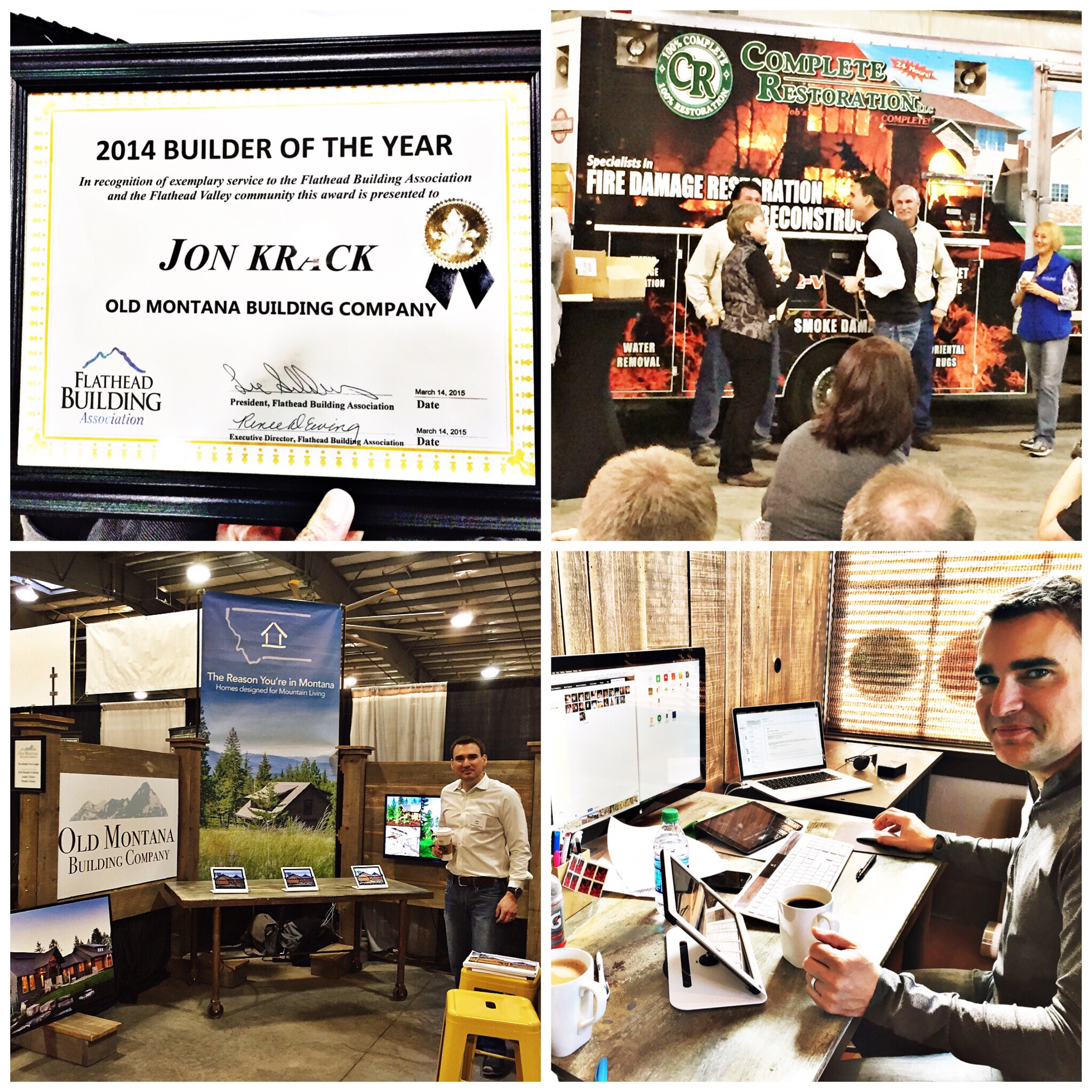 A couple months ago I nominated my favorite boss for the 2014 Builder of the Year award…and no surprise to ME he received the award from the Flathead Builder’s Association last night (so proud of him!).  Jon would be slightly embarrassed to read my tribute letter, but it is easy to write about someone you really believe in.  I’m pretty sure he doesn’t read the blog, so I feel safe posting it for everyone who does!  So here it goes…

I have worked with Jon Krack for the past several years at Old Montana Building Company, and because of the person he is, and my experience working for and with him, I am nominating him for the Flathead Building Association’s Builder of the Year Award for 2014.  Jon always says we are lucky to work in a valley full of talented, honest, hard working builders; he makes it a point to tell clients our peer builders are the best in the business…but I am going to take this opportunity to tell you why I believe MY builder is the best.

As the owner of Old Montana Building Company, Jon Krack, has over the past four year built several dozen homes around the Flathead Valley.  This year alone we have homes in construction from West Glacier and Hungry Horse to the Swan, from Blanchard Lake to Lion Mountain and a number of spots in-between.  We are building everything from a tiny one-room glass cabin on the Flathead River to a 3 story Fire Lookout on a cliff over Glacier Park to a 5000 square foot modern farmhouse in Bigfork.  We have such a wide variety of fun and exciting projects, a good example of Jon’s ability to branch out and build anything.

Jon has been a member of the FBA since 2011.  The past 2 years Jon has served as a member on the board for the Flathead Building Association and participated in a number of member events.  He chaired the web design committee and participated in a number of FBA activities and meetings, he takes his roll as part of the board seriously and we often talk about topics brought up and issues addressed.  Old Montana Building Company has participated in the Parade of Homes for 3 years, and in 2014 we entered 2 homes and won 9 awards, including the coveted Judge’s Choice and the People’s Choice Awards.

Jon runs Old Montana Building Company like a team, and because of this he has the respect of fellow builders, contractors, and our vendors and subs.  Everyone likes Jon and everyone likes to work with him and for him.  You can ask around, and I would say there isn’t anyone who would have a negative thing to say about Jon, which is pretty amazing and a good example of the type of person he is.  Jon has a way of bringing out the best in people, and encouraging new ideas and trying new things.  Over the past couple of years he has truly pushed the idea of building greener, more cost effective/environmentally friendly homes and our subs and suppliers have jumped on board and helped us achieve these goals.  Jon has really pushed the idea of working and being part of a team, and the people working for us respect his energy, his ideas and his attitude.

We like to say our company cares about what we build and who we build for, and how our clients feel at the end of the day.  And at the end of every project our clients treat Jon like a member of their family.  He has great long-standing relationships with every single person we have built a house for, and with every person who has helped make it happen.  It’s not an easy thing to accomplish in the construction business, but it is possible…and I love the fact our clients start and end the project respecting Jon like they do.  It’s a great feeling, and like them, I am very proud of my boss for making it happen like he does.

I can attest, probably better than anyone, what it takes to run a company like Old Montana and how hard Jon works.  Yet, he finds time to balance out being completely committed to his job and our houses and clients and being an awesome Dad to 4 super active kids and husband of the year.  He is involved with his local community, active in his local church, and loves living in the Flathead…and traveling in his “free” time.

As his side kick, I feel lucky to have a front row seat in watching Jon work…it’s a great feeling to watch your boss, your partner, your best friend and find such admiration and outstanding qualities in the way they run a business and the person they are.  This year I have had a different perspective in my Old Montana work experience…I have been the client.  Jon started building my own house this past summer (after a year of planning, designing and engineering) and for the first time not only do I get to work with Jon on a project, but I get to be on the receiving end of his talents.  Some would say this would be challenging for even the strongest of working relationships, but it has exceeded my expectations (and they were miles high to start!).   I expected nothing less than the best from Jon, but I have come to appreciate him and how he runs our business even more.

I didn’t want to build an ordinary house, and Jon has pushed me every step of the way to do something fantastic…and for me he planned and designed the “Lookout” which is unlike anything I could have imagined on my own.  I have always loved working with Jon, but after the past year of being the “client” I have a whole new respect for him as a builder (and this is coming from someone who spends every single day working in the business!)  Jon has gone above and beyond for me, he has asked our subs and vendors to go above and beyond for us, and saying I am going to end up with my dream house is an understatement.  The entire experience from start to where we are now has been priceless, and reconfirmed what I already knew…I work with and for the BEST builder in the Flathead Valley.  I might be slightly biased in my opinion, but I’m 100 percent certain of it.  I can’t think of a better person for the 2014 Builder of the Year.  In my mind…Jon Krack will always be MY builder of the year.